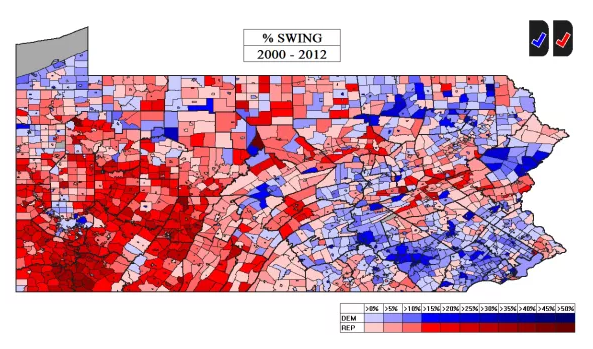 The election discussion is drawing attention to the widening political divide between my two major client groups.

Nate Silver, writing for fivethirtyeight.com says “eastern Pennsylvania is becoming more Democratic while western Pennsylvania is becoming more Republican”. This confirms the trend that I noticed that even seems to be affecting my business practice. This graphic shows the political landscape in 2012. I suspect the distinctions (the dark colors both red and blue) are even stronger today.

Politico published an article on exactly the same topic about my community of conservative Main Line Republicans but worded the conclusion even more sharply: “The traditional Republicans of the Main Line and other areas around Philadelphia hate his guts”.

WSJ wrote: “In a recent Washington Post/ABC survey, 62% of white voters without a college education support Trump compared with 39% among white college graduates, a 23-point margin. And in Pennsylvania, a major battleground state this election, a majority of voters with a college education – or 56% – support Clinton, according to an NBC News/Wall Street Journal/Marist Poll released last week. If this holds, it would be the largest educational divide among white voters in at least three decades.” It is clear that where you live combined with your level of education are the strongest non-physical strong predictors of your political beliefs perhaps even stronger than physical characteristics like race and sex. This distinction is quite surprising to me.

The majority of my clients are in the Main Line area just west of Philadelphia, educated professionals with upper middle class income, well-connected with the community through a network of political and nonprofit entities. This local area is well represented by medical and legal professionals and is more heavily Jewish. They lean toward Democratic platforms and are overwhelmingly anti-Trump. You can see this group graphically depicted in the dark blue region just west of Philadelphia. Within this region, for example, it is quite rare to see a Trump bumper sticker or lawn sign.  I even wrote about how a physician’s action of only verbally expressing support for Trump was questioned as a character flaw by a high-ranking board member of their Philadelphia hospital group. The discussion is quite one-sided here in this traditional Republican stronghold.

The remainder of my clients tend to be suburban business owners, mostly in the construction industry, with high net worth typically into several million dollars, typically not college educated and not especially connected with the political community outside of their church and community schools. They tend to be more heavily represented by fundamentalist Christian groups. They are strongly Republican and seem to support that party regardless of their feelings for the candidate(s). You can see this group graphically depicted in the red arc above Philadelphia in Montgomery and Bucks county. When I drive through this region, it is easy to see that Trump lawn signs dominate.

What I notice lately is that their approach to business, taxes and compliance varies dramatically depending on local overtone the political environment.

It seems more important than ever before for an independent business adviser to be aware of these distinctions and plan engagements accordingly.