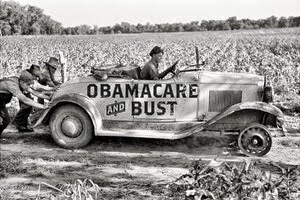 (Hint: It’s pretty much the same reason as I opposed ACA but with a new additional objection that it gives unwarranted tax breaks to the wealthy).

“Anybody with $250,000 a year of adjusted gross income and a lot of investment income is going to have a huge tax cut.” – Warren Buffett, 5/5/2017 on the Republican health care bill. Buffet estimates his taxes would drop by 17%. President Trump tweeted that he would pay more under the new Republican plan but tax authorities like Tony Nitti wrote that would be impossible.

The Republican health care bill does a lot to cut taxes for wealthy corporations and individuals. It does nothing to cut the nation’s out-of-control health care spending.

Warren Buffet helped put it in perspective this way:

In 1960, the year I was born, corporate taxes made up 4 percent of GNP. Now they amount to half of that at 2 percent of GNP. So while published rates are higher, corporations pay less of their share of the public financial burden. The large majority of people polled by Gallop over recent years agree that large corporations and wealthy individuals do not pay their fair share of taxes.

So corporations pay a smaller portion of our total public expenses while health care devours up a much bigger portion of our money. Given this simple and basic analysis that even a Congressman can understand, why are Republicans focused on cutting corporate taxes instead of cutting health care costs? It makes no sense, and that’s why I strongly oppose the Republican health care bill.

We’ve known for decades how to solve the health care crisis. It is simple, in theory, and plenty of other nations have done it. We simply lack the political will to get the job done. But it is an absolutely terrible idea to make a bad situation even worse by refusing to address the underlying problem and deflecting attention to a fake issue that corporate taxes are too high. Separately, I’ve published a short explanation about why the new Republican health care bill is such a threat to your personal financial security.

There is only one solution: cut health care costs dramatically. Yes, that means cutting back, setting limits and rationing publicly funded medical care. Yes, that means some people will suffer more and die earlier than if they had a blank check medical care. But this change is necessary and inevitable. We just don’t want to face it.

For more than 30 years as a health care adviser I’ve predicted that we will have a national universal publicly funded basic health care plan supplemented by private plans for those who can afford it. Essentially we will wind up with class-based health care. It seems that we will arrive at this inevitable conclusion, as Churchill says, only after we’ve tried everything else.